(This article was originally published at http://www.kuyperian.com/how-to-avoid-death-by-eucharist/.) 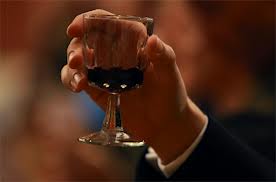 Growing up in a Southern Baptist church, I became accustomed to eating from the Lord’s Table once a quarter. The words of institution were read from 1 Corinthians 11, and the organ droned “Have Thine Own Way,” until everyone had been served. While the organ hummed we examined ourselves to see whether or not we should have been partaking at all. Most of us sat with heads bowed and eyes closed. (I know because I often got tired of examining myself and looked around hoping someone was doing something interesting.) Afterwards we left the auditorium in silence, not talking or fellowshipping until we had made our way into the outer hall. It was very respectful, for which I am thankful, and very somber, for which I am not.

In college, I was a member of a Primitive Baptist church, which I considered a much better experience. There was no organ, which I considered an improvement – though its absence was based on bad exegesis. Replacing the organ was robust, congregational singing in four-part, shape-noted harmony. The service of the Lord’s Supper was always followed by a foot-washing and a congregational meal. Both of which were high points in the first two decades of my life.

Compared to the Southern Baptists, the Primitives had some things going in their favor, but the thrust of the Lord’s Supper service was still focused on internal, self-scrutinizing assessment, which resulted in the feeling that this crust of bread and thimble of wine could put you on your death bed. The Primitive Baptists are working very diligently to be a “New Testament church,” employing a positivist, regulative principle of worship that incorporates what God has said from Acts all the way to Jude. Unfortunately, this leaves out all of that revelation where God described in detail how He wants to be worshiped.

Here’s the rub. Christians should be careful to hear and to heed the words of Paul in 1 Corinthians 11. He actually did say, “Let a person examine himself, then, and so eat of the bread and drink of the cup.” (11:28) Next, Paul really did say, “For anyone who eats and drinks without discerning the body eats and drinks judgment on himself. This is why many of you are weak and ill, and some have died.” (11:29-30) This type of talk could push a rational person toward the Scottish church and the whole “once a year communion” practice. That would radically decrease ones chances of “death-by-Eucharist,” but is that what this is really about? Did Paul really intend to turn a meal with Jesus into a time of inner turmoil and fear?

I propose that a meal with Jesus should be a happy time. Happy. Happy. Happy. Why so happy when this is a time to remember that Jesus has died? Well, I maintain that this time should be happy because upon every remembrance of Jesus’ death, we remember that He is not still in His tomb. We remember that Jesus was delivered up for our trespasses and raised for our justification (Rom 4:25). Christ is no longer present on the cross. He is no longer present in the grave. He reigns.

Why so happy when this is supposed to be a time of self-examination? We have examined ourselves already; earlier in the same service actually. The whole body present in that room ascended the hill of the Lord, corporately confessed our sin and then heard the assurance proclaimed from God’s under-shepherd that we have been forgiven in Christ. We weighed ourselves in the scales of the law and found want; we confessed this lack of conformity to God’s Word, and He was faithful and just, just like He said He’d be, to forgive us our sins and to cleanse us from all unrighteousness (1 John 1:9); and we heard that our sins are forgiven in Christ proclaimed loudly and joyously by our pastor.

When self-examination is over, and at some point it is supposed to be over, it is time to feast. If the feast is your time of self-examination, then it may not be a feast with Jesus. He wants your head on his breast while you hoist your glass of wine; not your eyes on your belly button, while you wonder if you’ll make it out of the room alive.

Once, Nehemiah was interrogated by a king for being sad in his presence. Nehemiah knew better than to pull that kind of stunt, but he couldn’t help it. His heart was heavy because the place of his fathers’ graves was in ruins and the gates destroyed by fire. The king understood because Nehemiah had a good reason to be sad. Christian, your King is far more understanding than Artaxerxes could ever have been, but you have no reason to be sad. The gates are no longer in ruins. Jesus’ kingdom has come, is coming, and will come on earth as it is in heaven. What reason have you to be sad? Does your heart condemn you? God is greater than your heart, he knows everything. (1 John 3:20) Do you have sin to be confessed? Confess it. (1 John 1:9) Examine yourself, and then joyfully come. (1Cor 11:29)